Balanced on the Edge of Similarity 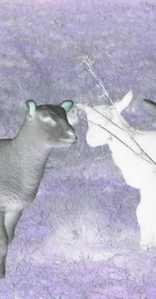 In the introduction to ‘The Botany of Desire’, a book about the co-evolutionary success story of four domesticated plants, Pollan poses that “domesticated species don’t command our respect the way their wild cousins often do. Evolution may reward interdependence, but our thinking selves continue to prize self-reliance. The wolf is somehow more impressive to us than the dog.”

In Haraway’s ‘Companion Species Manifesto’, I see a similar sentiment reflected. Although she is critical of co-evolution presented as a story of Man’s dominion over other species and the romantic idea of “Wilderness before the Fall into Culture”, she also notes that “to regard a dog as a furry child, even metaphorically, demeans dogs and children”. Apparently, a companion species still derives its value out of their possession of a “’being’ of another species so different from my own”.

But what if this different, ‘wild’ creature pulls the strings? In ‘Dawn’, the alien Oankali are the ones doing the molding; the humans that decide to breed with them are seen as pets by other humans: dominated and dependent, acted-upon but not acting. They gave up an essential part of their value as a human being. This relates back to the reduction in value that is created by stressing the animal aspects of a human, as described by Rossini.

So what happens if the interaction is not seen as ‘dependent’ but as ‘interdependent’? Fausto-Sterling (quoted by Rossini) touches on this with “biocultural systems in which cells and culture construct each other”. Pollan gives a poignant example: “After ten thousand years of co-evolution, (…) genes are rich archives of cultural as well as natural information. (…) Every Russet Burbank potato holds within it a treatise about our industrial food chain – and our taste for long, perfectly golden french fries. That’s because we have spent the last few thousand years remaking these species through artificial selection. (…) What is much less obvious, at least to us, is that these plants have, at the same time, been going about the business of remaking us.”

Our brains are shaped by the world we live in. Your DNA is epigenetically influenced by the plants your grandmother had for dinner. They make us and we make them. In that sense, I disagree with what Haraway calls an “unethical projection”: dogs as furry children. Just like humans are also hairless dogs. We are about each-other – we made each other into this projection, this realization of an intention, this telos of an edge we seek: to be different – but not too much.