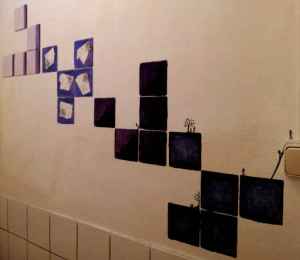 In 1970, the mathematician Conway devised the rules for a cellular automaton that would become known as the ‘Game of Life’. The rules of the Game of Life depend on it existing in space, in an infinite, two-dimensional grid. It can therefore very easily be visualized. The outcome depends on the ‘code’: the rules of the Game and the starting conditions. The rules are very simple, yet capable of creating self-replicating structures and complex forms that create other complex forms themselves, depending on the initial pattern.

When it comes to the Game of Life, we are the perfect example of Laplace’s demon (1814): we know the starting position of every ‘atom’ with ultimate precision, and we know the rules by which this universe operates. In principle, it holds no secrets for us. It is the epitome of what Franklin (2000) describes as life as information, the reduction of nature to biology, biology to genetics, genetics to re-programmable information. Of course with the Game, it is ‘just code’ from the very beginning.

It is exactly this notion of ‘just code’ – or ‘just a machine’ – I’d like to challenge here. As Wright (1996) notes, ambivalence towards science is often fueled by the combined need to control and the desire to retain freedom and agency. We don’t like determinism, we want to have free will, but we also want some structure in our universe – some pattern that surpasses total randomness, some possibility for understanding and a level of ‘meaning’.

Science is often seen as providing understanding at the unavoidable cost of disenchantment. Braidotti (2011) notes about the idea of objective observation: “This detachment and objectivity are connected to a functional, disenchanted, and sadistic scientific vision”. To counter this bleak notion of science, popularization often focuses on the aesthetics, awkwardly forcing the beauty and complexity of nature though the microscope upon us.

But we can ask ourselves why we are so uncomfortable talking about humans-as-code, or humans-as-machines. Why, when talking about reductionism, is the idea of ‘reducing’ not only used to mean ‘making smaller’ but also ‘making less’? Do we need meaning to have value? Or do we need value to have meaning? With the Game of Life, we made the perfect visualization, the perfect model – a world deprived of meaning. How is it then that so many people find this model to be so infinitely interesting?

Title is from the comic book: “SCIENCE: Ruining Everything Since 1543” by Zach Weinersmith (2013)