It was in preparation of the conference ‘Love and Sex with Robots’ (after the book by David Levy that is currently in my bookcase waiting to be read, but I have heard it should be very open-minded and insightful).

I’m really happy that the subject of intimacy and sexuality gets some much-needed attention in the scientific field of robotics and AI – it’s no use being bashful about a topic that is both so important to human experience and so prone to being handled completely wrong. Apparently some people would like to put a stop to any discussion about sex technology, as it is bad and bias-confirming (and they are not completely wrong, what with privacy-issues and the ubiquitous use of stereotypes in the design of robotic companions). But if you ask me, these are all the more reasons to discuss the topic openly and without mincing words, especially in the scientific community.

Luckily, the atmosphere at SexTechHack suggested the attendees agreed. It was great to meet so many people interested in discussing sexuality and technology respectfully but openly, and seriously but without being too draconian about it. There were many awesome, funny, serious, personal, idealistic and clever projects, and you can see all the presentations on them here. My personal favorite was the erotica-writing bot (which showed both the promises and the pitfalls of sex-tech by turning deeply racist in its first iteration), and a vibrator called ‘Ride the market, fuck the system’ that took it’s vibration patterns from the stock-market. Oh, and a sex-toy based on a Bop it toy!

But I wanted to write something about the project I made together with wonderful human beings Libby, Tom & Tom (yes we had two Tom’s). We were interested in the extension of the human body, and our project was called ‘PeaCock’. (If you’re wondering, yes there were many many puns at the event – the next SexTechHack is called ‘The second coming’). Our presentation you can see here:

Peacocks are of course well known for being completely over-the-top. The peahen, in comparison, is a quite nondescript brown bird. Similarly, there is a visual and experiential difference between an aroused penis and an aroused vagina. The penis, being placed outside of the core body, is much more visible and apparent in its aroused state. This visibility is on the one hand connected to embarrassment and shame – almost everyone with a penis has experienced an unfortunately timed erection. But it is also connected to pride and joy – many cultures emphasize the erect penis and even more use it as a literal measure of masculinity and sexual competence.

So how do we translate this experience for people who have a vagina? The first thing we considered was the difference between controlled versus uncontrolled vaginal signals. The muscles in the wall of the vagina can be controlled deliberately, but not many people have control over the level of moisture produced. Therefore, we used these two as inputs for our experience. 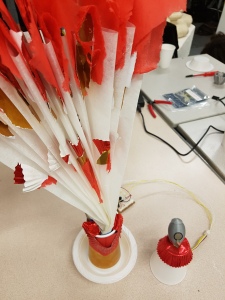 Then, we thought about the experience itself – we briefly considered making it virtual, but liked the idea of something that could be worn around in the real world. We also considered the question of making it literal (building something that looks like a penis, basically), metaphorical (for instance a blooming flower), or abstract (a string of lights, a sound…). We ended up with the idea of the peacock-tail as a metaphorical representation of arousal.

Lastly we considered the purpose. Of course, there are devices already that function as a penis for people with a vagina, like strap-ons – they are meant to be mainly functional. But a device that ups the visibility of arousal can also be performative – there are some art performances that do exactly this. Lastly, it can be mainly meant to be experiential – focused on the experiences of the wearer. While a peacock tail is of course obviously performative in nature, we are also really interested in the experiential factor.

This attached neatly to my own research interests. I do research in the field of social embodiment, and sexuality is of course one of the most embodied forms of social experience. Intimacy is associated with closeness, closeness is associated with the body-space (even if that body-space also extends into the digital and the virtual these days). An 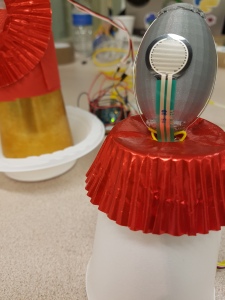 interesting concept in embodiment is homuncular flexibility, the ability of our brain to literally ‘incorporate’ extra body-parts, and even non-human body-parts, into our body-image. This experimental peacock-tail is not far off from studies with extra arms and virtual monkey-tails – but it also transforms the functionality of the tail by making it mainly a signaling organ.

We build the tail with a little 3D-printed egg, containing both a pressure sensor and a simple moisture sensor (it was intended as a proof-of-concept only – I tested it in my mouth and can sincerely advice anyone to not put these sensors in any sensitive areas). It was connected via Arduino to 2 servo-motors that unfurled a large decorated fan. Our idea was to attach it to underpants so it would seem to sprout from the tail-bone. When the pressure sensor was pressed, the tail would quiver. Meanwhile, the moisture levels detected decided how spread out the fan was at any time. This way, the tail could be controlled both consciously and unconsciously. You can find the Arduino-code on GitHub here.

The end-result was both funny and decorative, and weirdly interesting even though not strictly ‘functional’. We won the price for best concept, which was of course a sex-toy! 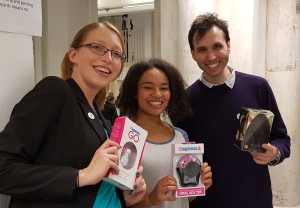 Mine can’t wait to go back next year to get hacked!