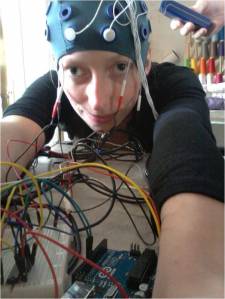 Finally some more information on the project mentioned here!
I was part of the team that won Hack the Brain, an awesome three day hackathon on EEG-software. With the combined input of a computational neuroscientist, a creative researcher, an industrial designer and yours truly, we developed a concept for a ‘Trans-Conscious Messaging Protocol’ (as xkcd puts it). However, we used somewhat fancier methods than training yourself to type in your sleep. What kind of methods that were I will attempt to describe in this post.

So first of all, something about lucid dreaming. As you may know, humans sleep in five ‘stages’. One of those stages, REM (Rapid Eye Movement) sleep is most important for dreaming. The stages can be recognized in an EEG signal (from an electroencephalogram, which essential measures the synchronized activity of lots of neurons as electrical activation across your scalp) as they all have a distinct profile. REM-sleep is actually closest to 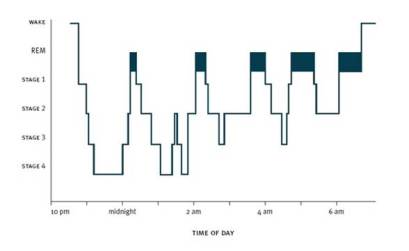 waking activity. Lucid dreaming looks like REM-sleep but has some specific features in the frontal and temporal cortex, namely increased activity in the lower gamma band. That refers to signals around 40Hz. This will be important later.

But what exactly is lucid dreaming in less technical terms? According to the LuCiD scale, developed in 2013 by Voss et al., three factors are typically increased in a lucid dream (although not necessarily all together). The first is Insight, which means that you know that you are dreaming. The

second is Dissociation, which means that you feel removed from the action – as if you’re watching a movie. And the third and probably most famous one is Control, where you can steer your dream and make anything you want happen.

Lots of people have lucid dreams occasionally. Some people have them a lot. Many people also try (with varying success) to get more lucid dreams by training themselves, as especially the factor of control sounds appealing to them.

And here is where the good news comes in: in May this year, Voss et al. showed that stimulation with an alternating current of 40Hz could actually induce lucid dreaming. And we’re talking pretty impressive results here: 77% of subjects experienced some form of lucid dreaming, and these were all people who never dreamed lucidly before.

So how do you stimulate the brain with 40Hz alternating current? You use a tACS device (trans-cranial alternating current stimulation), which we did not have available at the hackathon. So we build one with an Arduino and a very simple circuit – basically the same set-up with an H-bridge that you would use to run two basic stepper-motors. Only instead of the motors, we attached four electrodes (the sticky ones made for putting on your skin). We placed them the same as Voss et al. did (two frontal, two temporal). Teammate Arjen was brave enough to be the first to actually flip the switch. Don’t worry, he’s still alive! 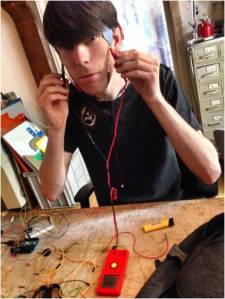 (By the way, you might recognize this general idea from tDCS devices, that are even simpler and use direct current. They are currently pretty hip because they are said to increase some cognitive functions, like concentration. tACS is slightly different but the risks are pretty much the same – which means they are quite safe, but it is still very much advised to read up on them before use!)

We used serial communication between Arduino and a laptop to adjust the frequency real-time, as Voss et al. noted that lower frequencies (25Hz) also could have the desired effect. We figured that if lucid dreaming was not induced with 40Hz stimulation, we could adapt the frequency and try again.

Unfortunately, a three day hackathon proved too short to replicate, even on a small scale, the research by Voss et al.. But we did manage to test the whole set-up by measuring the EEG and stimulating while awake, as well as in sleep-phase 1 and 2. No REM-sleep could be achieved in the noisy work environment, however. So no lucid dreaming for us… yet.

But our concept wasn’t done. We also wanted to make use of an awesome effect you can see illustrated in this short movie:

As is explained a bit in the video, you can make someone ‘act out their dreams’ by cutting certain neural pathways. This would work on people too (in fact, it sometimes goes wrong all by itself). Essentially, your cortex (top part of your brain) does not ‘know’ you are sleeping. So according to the motor cortex (that controls your muscles) running in a dream is the same as running in real life. To keep you from hurting yourself, however, the lower parts of your brain effectively paralyze your body so you can not move. This is called REM atonia.

The beauty of this is that we can actually measure the EEG in the motor cortex to get an idea about motor intent: the actions that your cortex thinks your body is doing. This was already tested in natural lucid dreamers in 2003 by Erlacher et al., who asked them to clench their left and right hands in a predetermined pattern in their dream. Expanding that to everyone who reacts to tACS gives us a much bigger audience with more possibilities.

So what are some of the possible uses?  First of all, there is research into the cognitive aspect of consciousness. ‘Why do we dream?’, ‘What does it mean to be conscious?’ and other interesting scientific questions can be addressed with this method. However, there are also more practical applications, like helping patients with phobias or post traumatic stress disorder (PTSD) cope with their fears and flash-backs. There is some success with treating PTSD with virtual reality games to let patients experience their fears in a controlled environment, thus getting them under control. Imagine how much better that could work when the patient can design the whole environment themselves without having to learn 3D modeling and game-design – simply by dreaming it up. Additionally, a therapist can monitor the motor intent in the EEG, so the patient can send simple signals about their progress, or in the worst case a distress call to be woken up. 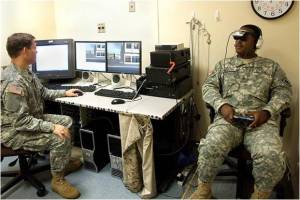 Concerning more recreational use, you can think of the large community of lucid dreamers on the internet, exchanging tips and tricks on how to train yourself to dream lucidly. Some devices are available, but they are all basically simple tools that help a bit with training but nothing more. Stimulation would be easier and seems to have a higher success rate. Besides having fun in your dreams, lucid dreaming can also give you extra time during the night, for instance to learn skills. People seem to get better at sports when they ‘train’ in their dreams (Erlacher et al. 2010), so why not do those pesky work-outs while you sleep? You could even show the motor intent measurements to your fitness trainer to prove you have been working out…