Do I dare call myself an atheist? 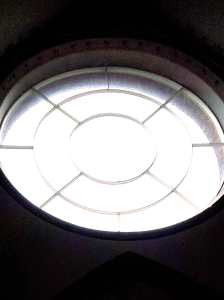 First the thing that started this train of thought: prominent atheists. I read those two words and suddenly realized how very silly they were. What is a prominent atheist? The fact that an atheist can be ‘prominent’ for being an atheist says something about what we think atheism itself is. Or what it has become.

A very literal definition of the word would be ‘without Gods’. This definition also seems most inclusive: it even includes religions and spiritual movements that do not incorporate a God or Godlike being in their belief-system. But that wouldn’t provide you with prominent atheists, because atheists would just be people not having something – and it is difficult to be prominent in the art of not having something, especially if no-one else not having it cares much about it.

And that is the thing, right? We care. We care so much. Atheism is not about not having a God and not caring, it is about caring deeply, vehemently, that there is no God. And thus, it becomes a THING, a rallying cry, an identity construct. And the best constructors are prominent atheists and get to be famous for… not thinking something is there. And trying to convince others that it’s not there either.

Oh, I understand, to a certain level. Wanting to move forward, leave old ideas behind when new knowledge arises. Wanting a voice. Giving people the chance to look at all the available information and form their own informed opinions. Destroy old ideas that are dangerous to people’s well-being. Remove obstructions so science can go on its merry way to more knowledge.

But I see so much going wrong as well. The creation of a science vs. religion war out of thin air. Self-proclaimed scientists that declare all Darwin said Holy and Untouchable. Criticism of one group that places you automatically in the other, whether you want to or not. Prominent leaders becoming ineffable – and that in a community that prides itself on scrutinizing every idea. The goal of science being reformed – from a method to discover how the world works to a weapon that slams into everyone the notion that at least God wasn’t involved in the workings. Let’s not address sexism or racism within the scientific community – because you don’t know oppression until you’ve been an atheist. The majority is against them and lists of articles about science need to be shared with everyone who vaguely smells of evolution-denial. The atheist fights a difficult war. I must admit I’m not sure what victory would look like, or whether I’d like the society that would grow from it.

But perhaps I have it easy? Atheism, for me, is just an absence. There never was a God in my life, as I wasn’t raised religiously. I didn’t have to fight a non-existence. I didn’t notice the non-existence, because it wasn’t there. I knew about the concept of a God – I read children’s versions of the Bible and the Quran. But I also read other fiction, so it was never a point. I didn’t need to define it, either. Never needed to come out of that particular closet – “Mom, Dad, I’m an atheist” (*two silent gasps, maybe something falling to the floor with a resounding ‘thud’*). It was just not part of my identity. Not-believing is not who I am. My identity is not based on things-I’m-not.

I’ll fight for science though, gladly. But only once have I thought that the way to do that was spamming people with articles about evolution (I was 14). Now, I’d say the actual conclusions you draw do not really matter – the value of the scientific method is the starting point. Not people telling you what to think, not people telling you what sources to trust. People showing you a way to gather information, judge its value, and draw your own conclusions from it. Daring to release people.

I you’d force me, I’d say I was an apatheist. Because that’s a nice word and it kinds of describes how I feel about the whole thing.

But somewhere, that grinds my gears. Why make up a new word? I don’t like it when people are all for equal treatment of women and men, but do not dare call themselves a feminist because of ‘negative connotations’. So why shy away from calling myself an atheist (‘without Gods’) just because some people – is it still a minority? – made it into a self-righteous crusade of non-belief?